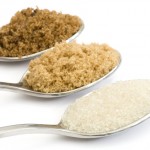 So you want to cut down on sugars but you don’t want chemically-based sweeteners either? Mother nature has come to the rescue! Here’s the skinny on four great natural sweeteners that make staying healthy taste better than ever:

Xylitol Xylitol is a sugar-alcohol that is naturally found in fruits and vegetables, and made by the body itself. It has 2/3 less calories than table sugar. It is commonly used as a sweetener in sugar-free gum because it has been clinically shown to improve dental health by reducing cavity and plaque formation. Xylitol is safe for diabetics to use because it doesn’t affect insulin levels. Xylitol can be bought in bulk at local health food stores.

Erythritol Erythritol is a sugar-alcohol that is naturally found in some fruits and fermented foods. It has no calories and it’s almost as sweet as sugar. It is used as a sweetener in a lot of sugar-free foods and is also available in bulk at some health food stores. Bonuses for erythritol are that it doesn’t cause some of the laxative effects associated with other sugar alcohols due to the way it is absorbed by the body. Like xylitol, it is resistant to cavity-causing bacteria and is safe for diabetics.

Stevia Stevia is a leaf and not a sugar. The extract is taken from the plant and processed. Stevia has a bitter aftertaste in hot things, but it is much less pronounced when used for cold foods and drinks. Stevia is emerging as a new sweetener that is automatically added to some foods and beverages. It is calorie-less and thought to be safe for diabetics. Due to the synergy effect, it is often mixed with sugar-alcohols to moderate the bitter taste and to boost the sweetness.

Luo Han Guo Luo Han Guo is a fruit found in Asia. It is ground up as a powder for use as a sweetener. It is about 150 times sweeter than sugar, but safe for diabetics. Some have noticed a caramel aftertaste (as opposed to the bitter aftertaste of stevia). As a fruit, Luo Han Guo has plenty of antioxidants. It is mostly available online in the United States, but keep an eye out for it in your favorite health food store.